So there’s been a small problem in the bathroom in the basement…the sink was leaking pretty bad…all the freakin’ time. So I shut the water off to the sink, which then also had the unfortunate side effect of also shutting off water to the toilet.

Whenever anyone wanted to use the basement toilet, they had to turn the water back on to flush it. That worked ok, until the handle to the valve broke, and then the water needed to be shut off with a wrench attached to the valve. One thing after another, lol.

I finally decided it was time to try and fix it…I ordered a new sink to replace the old one, and spent a couple days trying to install it. Normally, installing a sink isn’t a big deal, but every pipe down there was rusted and broke on me. Pretty sad. But…

the sink is in, the toilet is working, and I’m happy. 🙂

I plan on calling a plumber to eventually update the plumbing down there so the toilet is on it’s own line, separate from the sink. But for now, this works! 🙂 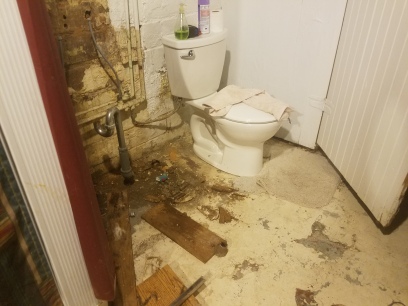 Dropped the old sink trying to carry it out to the garbage…oops!